We continue to visit the churches in the border cities of Agua Prieta and Nogales to teach and encourage them.  We, of course, have grown to love these brethren and we look forward to seeing them and they to seeing us.  Each time I visit them, I bring along copies of maybe five of my encouragement lessons, translated into Spanish; they help facilitate teaching and spiritual discussions.  About a year ago, we introduced the brethren of the two cities to each other since they previously had not known each other.  I know that seems odd, but it is a journey of three hours between their cities and they don’t travel much from their home town.  Since then, they have visited each other several times and enjoy the fellowship and love that is growing between them.  Recently, brother Alonso from Agua Prieta came a couple of times to Nogales to visit the brethren and one time he spent several days working with brother Cesar in sharing the gospel in the neighborhood of the Nogales church.  We are hopeful that in the near future, brother Cesar can go to Agua Prieta to do the same thing with brother Alonso there.

The big thing that happened this month was our two week trip visiting some of the churches in Mexico.  Brother Duane Cogburn of the Albuquerque congregation went with me.  Our first stop was Nogales, Sonora, where we picked up brother Cesar to be our traveling companion.  Our first destination was San Luis de Rio Colorado.  It has a population around 160,000 and it is located just south of Yuma, Arizona.  We met with brother Victor and sister Karina and their two children on Sunday morning.  As you might remember, I baptized them a couple of years ago and have visited them several times.  They are meeting in their house.  It is tough being new Christians and not having a close church family.

Our next destination was Los Mochis in the state of Sinaloa.  It took us a day and a half to drive between the two cities since it is a 14 or 15 hour trip.  In Los Mochis, we met with sister Lorena and brother Abdon; they welcomed us so warmly.  Los Mochis is a city of about 250,000 people.  From Los Mochis, we visited the church in Las Flores, which is maybe an hour and a half away.  Las Flores is a small farming village that you probably won’t find on any map.  Even though it was a week day, many of the members of the congregation met with us as we read and discussed about ten of the encouragement lessons.

From Los Mochis we flew to the city of Merida in the state of Yucatan.  In Merida, we rented a car and traveled south about two hours to the city of Tekax; this is a city of about 25,000.  There we met with brother Diego, sister Patricia and their three sons.  On both Saturday and Sunday we visited the church in the village of Bechanchin, south of Tekax, where we again encouraged and instructed the brethren.

Our next destination was Mexico City.  The metropolitan area of Mexico City has a population of 21 million, making it the largest city in the western hemisphere.  It seems that everyone there owns a car and all the cars are out on the streets at once – at least that is what it seems like.  The traffic was terrible, some of the roads in bad shape, the drivers very aggressive, and the signs difficult to follow; I did not enjoy driving there.  Our real destination was Tizayuca, a city of about 50,000 people north of Mexico City.  There we met with brother Pepe and his family.  I had previously met Pepe when he lived in Agua Prieta several years ago.  He currently meets with a small church in Tizayuca and I needed to know where they stand.  Pepe’s brother, Mari, wanted to meet us so he traveled by bus and joined us.  Mari works with about four churches south of Mexico City, near the city of Cuernavaca.  We had several good studies and discussions.  From all the questions I could ask, they believe and practice just like our church does.  We did not meet with any of the churches, but these two brothers are leading men in their respective churches.  Someday I would like to brave the road traffic and return and meet with some of the congregations there.  Even without attending their congregations, I would say that I have Christian fellowship with these brethren.

We did make one side trip to visit the Aztec city of Teotihuacan that has the Pyramid of the Sun and Pyramid of the Moon; these are two very large stone pyramids – very impressive.  From Mexico City, we flew to Los Mochis and then made the long drive home.  The Lord richly blessed us in our journey.  We had good fellowship and gave instruction and encouragement to the brethren we met with.

Pray for the success of the work in Mexico.

Bro. Juan, his wife and mother-in-law in Las Flores: 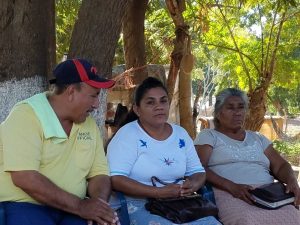 Bro. Pepe and Bro. Mari at the Pyramid of the Sun near Mexico City 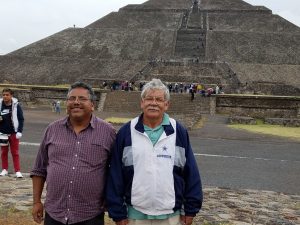