Mexico Report May through August 2016

We have been visiting the church in Nogales and the church in Agua Prieta once a month to provide instruction and encouragement to the brethren in each city.  It is relatively easy to visit these churches in the border cities.  Our house in Sierra Vista, Arizona is approximately ten miles due north of the Mexican border, but there is no road that goes directly south across the border.  From our house it is perhaps an hour and a half to the church in Agua Prieta by traveling east to the city of Douglas, Arizona and then crossing the border.  Similarly, it is almost two hours to the church in Nogales by traveling west to Nogales, Arizona and then crossing the border to Nogales, Mexico.  Although many people are afraid to travel into Mexico, the Lord has blessed us that we have not had any problems.  It is fairly quick to enter Mexico; sometimes we drive right through the border, but occasionally the Mexican agents will stop our vehicle and look inside to make sure we are not bringing anything illegal or importing things that would require an import fee.  Returning to the USA can be more time consuming.  Of course we must have passports to prove our US citizenship.  In addition, we have applied for and obtained SENTRI passes which speed up the reentry process.  Without the SENTRI pass, one must wait in line for inspection by the US Border Patrol which can take anywhere from half an hour to several hours, depending on how many people want to enter the US.  With the SENTRI pass, our wait is perhaps five minutes.

The encouragement email that I send out each week in English, I also translate into Spanish.  Very few of our brethren in Mexico have email, so I print off copies of the encouragements in Spanish and bring them with us.  When we meet with the brethren, they read the encouragements in Spanish and provide comments concerning the topics and scriptures.  Since my verbal Spanish is poor, this method allows me to encourage the brethren and do some teaching as well.  Although our verbal Spanish is not the best, it is sufficient so that we are able to carry on conversations with them.  Brother Cesar in Nogales knows enough English that between his Spanglish and my Spanglish we get along pretty well.  In case you didn’t know, Spanglish is our term for language that is part Spanish and part English.

In June, I took brother Cesar, his wife, sister Margarita and their two teenage children, Karen and Cesar, Jr. to our church camp in southern Colorado.  This was an excellent opportunity for them to receive encouragement and for brethren in the US to get to know them a little better.  During one of the meetings at the camp, brother Cesar spoke and was translated by brother Hector Trillo of the Albuquerque congregation.

In July, brother Cesar and his family traveled to the Mexican state of Sinaloa for several weeks.  There he worked as an evangelist with the churches and spread the gospel to people he knew in the area.  At the church in Las Flores, one of the leading brothers was found to have misbehaved as a Christian.  Cesar applied discipline to the brother and he repented.

Brother Cesar continues to keep in telephonic contact with brethren from the different churches.  He also is able to visit some of the small churches with the truck that we gave him.

During a recent trip to Agua Prieta, we visited with the elderly brother Pedro and his family.  They informed us that two of the nephews of brother Pedro were now living in different cities not far from Mexico City and working with churches there.  I was assured that these churches were faithful.  I had previously not known about these congregations; I would like someday to visit these churches and find out more about them and if there are other faithful churches we could work with.

If the Lord wills, we plan an extended evangelistic trip into Mexico in November.  We are just now making plans for the trip.

Pray for the success of the work in Mexico.

Brother Jesus Alonso and the church building in Agua Prieta. 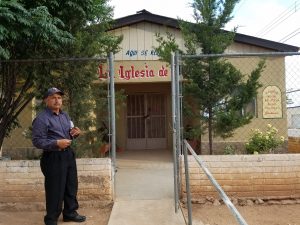 The gathering of the brethren in Nogales in August: 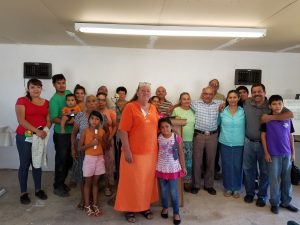