I spent the month of February in the Philippines, working with the congregations there and therefore was unable to spend time in Mexico.  In February, brother Abdon (Los Mochis, Sinaloa) lost his job.  He and his wife, sister Lorena, required extra help until he was able to find another job after about a month.

We visited the church in Nogales in both March and April as well as the church in Agua Prieta in April.  During each visit we had Bible studies and discussions and encouraged the brethren.  Since we live so close to the border, these visits to these cities in Mexico are day trips.  The churches in these cities are doing reasonably well.  I had previously reported about brother Jesus Alonso being incarcerated in the United States.  He was finally released in March; our visit to Agua Prieta in April was our first time to see him after his release.  He was so thankful for his release and our help while he was incarcerated.

In April, brother Eiland Scott (Deming, New Mexico), brother Cesar (Nogales, Mexico) and I made an extended trip into Mexico.  We first visited the churches in Los Mochis and Las Flores in the state of Sinaloa.  These are lengthy driving trips for us.  From my house, it is approximately 550 miles to Los Mochis.  We had several Bible studies with the brethren in Los Mochis/Las Flores and shared meals together.  On Sunday, we assembled with the brethren in the small farming village of Las Flores.  Brother Mariano is one of the lead brethren in Las Flores; he is a farm worker without any specialized training.  Now is a time of year when there is little work in the fields.  We encouraged brother Mariano to work more for the Lord by sharing the Word with people in the surrounding villages and offered to provide him with additional support.  He has committed to working three days a week in this effort.

From Los Mochis we traveled to San Luis de Rio Colorado.  This was a lengthy journey of about 700 miles.  In San Luis, we worked with Brother Victor and Sister Karina.  Again, we had several Bible studies and encouraged them.   The return trip home from San Luis is approximately 440 miles.

Pray for the success of the work in Mexico 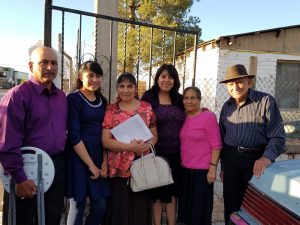